Outgoing California governor Jerry Brown thinks fighting climate change is as important as fighting the Nazis in World War II.  A few snippets from his Meet the Press interview:

California Democratic Gov. Jerry Brown warned that America and the rest of the world are falling behind in the fight against climate change and likened the challenge to fighting the Nazis in World War II.

In an interview for Sunday’s “Meet the Press,” the outgoing governor called on President Donald Trump to take the lead in addressing the issue. “Instead of worrying about tariffs, I’d like to see the president and the Congress invest tens of billions in renewable energy, in more-efficient batteries, to get us off fossil fuel as quickly as we can,” Brown said.

“I would point to the fact that it took Roosevelt many, many years to get America willing to go into World War II and fight the Nazis. Well, we have an enemy, though different, but perhaps, very much devastating in a similar way. And we’ve got to fight climate change. And the president’s got to lead on that.”

Trump’s lack of urgency on the issue exemplifies the partisan divide on climate change. A recent NBC News/Wall Street Journal poll released this month found that more than 70 percent of Democrats believe climate change is both “serious” and requires “immediate action,” but that just 15 percent of Republicans felt the same way.

Overall, people are growing more and more convinced of the urgency of the issue—45 percent of all Americans said they eel that sense of urgency, the highest since the poll started to ask the question in 1999.

Do you think maybe more people are being convinced of the urgency of the issue because you, the mainstream media, sensationalize and exaggerate?  Because you use fear-mongering to push your agenda?  Do you think maybe that has something to do with it?  Check out some of the #climate change posts to see how out of control their lying is.  The reality is they have no idea how good or bad the climate really is.  Their models are consistently wrong. 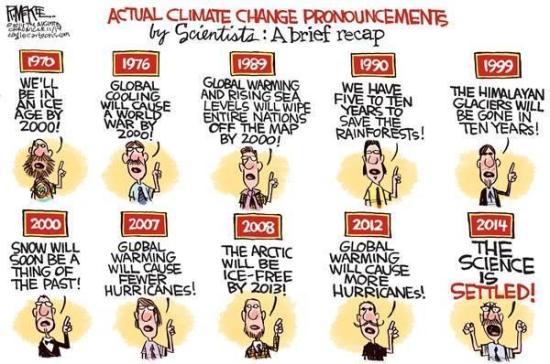 Think about how absurd and utterly despicable it is to compare climate change to the events of World War II.  Think about the hubris and/or utter disregard for the reactions of people to these BS statements.  It’s downright evil to peddle this line of thinking.  It is pure fear-mongering to even suggest this is as bad as that time more than 60 or so MILLION people died.  He’s essentially asking us to destroy our economy by investing billions of dollars to combat an alleged problem we’re not even sure we have.  And sorry, polling Republicans and Democrats doesn’t make the problem all of a sudden appear or disappear.  It really does not matter what anyone thinks…it does not change whether there is a problem or not.

If the Democrats really, truly, cared about climate change, they would immediately curb all immigration to first world countries.  If the “carbon footprint” thing is still the way they’re measuring our effects (it will probably change when they realize this doesn’t really help their case as much as they hope) then why would you import more people into 1st world countries, where the carbon footprint is vastly bigger?  The sooner one realizes that today’s liberals contradict themselves on nearly every issue, the sooner one can quit wasting their time arguing with them…arguments where facts don’t matter because they fall on deaf ears or because they only understand rhetoric.