February 9, 2019 By W. Cutting in Uncategorized Leave a comment

Yemen has executed two men for abducting, raping and murdering a 12-year-old boy by shooting them in public.

Wadah Refat, 28, and Mohamed Khaled, 31, had been convicted of raping and murdering a boy named Mohamed Saad in May last year.

Hundreds had gathered in the port city of Aden on Thursday to watch the men get shot dead in front of the baying crowd.

The boy had been playing next to a house where one of them lived, when the pair set upon him, dragged him into the home and raped him.

‘After the rape, they could not silence the cries of the child, who begged for help, so one of them grabbed a knife and slit his throat,’ court documents seen by El Mundo states.

A 33-year-old woman has also been sentenced to death for helping Refat and Khaled dismember the boy’s body.

Her execution has been postponed as she is pregnant, according to the website.

This is something I could absolutely get behind.  There are few, if any, crimes worse than what these two guys did.  We really should bring public executions back.  Real justice.  And it makes an example for anyone else considering it.  Why should these animals get humane deaths when they treat a precious child like utter trash? 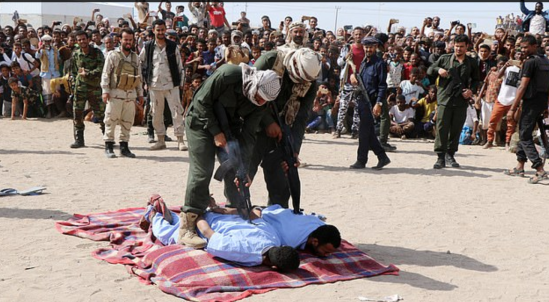 I am through with pleasantries and taking the high road.  When the atrocious crimes those in Washington DC, Hollywood, and elsewhere have committed to children come out I am sure more people will agree that this is a better course of action than what we currently do, which is to say maybe, MAYBE jail time for some offenders of heinous crimes against children.  I have zero tolerance for these people.  And before anyone on the left throws their arms up about how horrible and barbaric this is, take note that they actually value human life and are making sure the baby is born before executing the woman.  Maybe there is one silver lining to Londonistan becoming a Sharia country after all…