Doesn’t it feel like every other month is pride month?  At what point can we pump the brakes and treat these people like everyone else?  Is it possible to not have to glorify behavior which many people think is completely degenerate and corrosive to society? 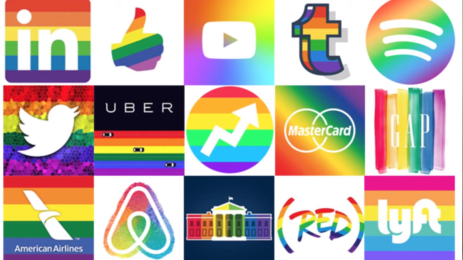 There’s a difference between allowing two consenting adults to do what they want to each other in privacy.  It is another thing to have it flaunted in front of you at every turn and be guilted into accepting their behavior.  Or worse, being forced to have your children indoctrinated into their perversions, whether it’s taught in schools or thrown in front of your face via parades and gigantic corporations virtue signaling how tolerant they are.

Tolerance of anything and everything is not a virtue.  It is evil.  It is how we’ve gone from letting two consenting adults do what they want to each other in the privacy of their own homes to having drag kids.  It is how we’ve gotten to the point where you can’t even bring up scientific studies that show that homosexuals are abused far more as children.  Where we can’t even point to science to even ask the question whether perhaps homosexuality is driven by trauma and the environment one lives in.  Now you are automatically vilified if you don’t immediately assume homosexuality is genetic.

It is becoming clear that because of toleration we have opened the floodgates.  It is everywhere.  Watch the above video.  He cites polls showing twice as many millennials identify as some sort of LGBTQ+ than other age groups.  At what point will people start to question whether this is because people are now comfortable to come out versus very real changes actually occurring based on a shift in psyche?  And how far are we willing to allow it to slide?  As I’ve said many times before, the next step down the ladder of degeneracy will be to try and normalize pedophilia.

It is actually possible to tolerate what two people do in private without ceding your entire society because of it.  Walk around Seattle or Portland and you still see rainbow signs with “Safe space” for LGBTQ+ nonsense.  Newsflash: they are safe everywhere in this country nowadays.  Gimme a break.  The pendulum has swung so ridiculously far in their direction that no longer is accepting them enough anymore.  If you’re not fawning constantly you are somehow a homophobic bigot.  So far has the pendulum swung that it is a huge plus if you are LGBT-whatever when applying for jobs.  It is an asset at this point.

It isn’t brave or edgy to side with LGBTQ+ like they want you to believe.  When multi-billion dollar corporations are on your side what you’re doing is none of the above.  What is brave is standing up against the tide of this degeneracy.  Only when people start to stand up and speak what they believe, rather than cower in silence, which on some level is tacitly submitting, will anything change.  More people agree with us than you’d think.  It’s the silent majority thing all over again.

Again, this isn’t a call to arms or anything like that.  Good Christians should love their enemy and their neighbor.  Look at it in a different light.  Perhaps if this really is more nurture rather than nature something can be done.  Pray for these people.  Many have gone through horrific trauma as children.  Now, if they want to change, and if people are willing to repent, good things can happen.  What won’t help is pretending like this slide into degeneracy and worse is somehow acceptable and totally normal and okay or in any way good.